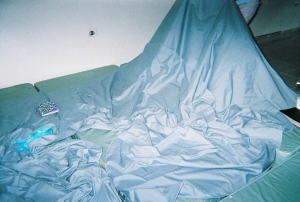 After lunch we began another ATL.  But this time I couldn’t hear the Spirit counseling me.  What a bummer.  And I knew what it meant.  I had seen in the morning session that those who didn’t hear  would get stuck in Covering Prayer.

Being obedient to God’s direction in our lives can be the hardest, yet most rewarding thing we ever do.  If you’re new to it, it’s extremely difficult to bend your own will to that of some invisible God.  In fact it really doesn’t get any easier to submit.  But over time you begin to see that God actually wants what’s best for you.  When you are obedient and follow Him, you’ll experience a far richer more blessed life than if you had gone your own way.  (Of course at this time, I was pretty new to this, so I had no idea what was about to happen next).

The five of us in Covering Prayer were given a piece of paper with everyone on the team’s name on it and a description of where they were serving that afternoon.  None of us wanted to be there.  The room was a hot, summertime non-air-conditioned room.  There was no furniture, so we were on the floor.  We were good natured about the pain we were about to endure, but we were grumbling a bit.

The five of us invited the Holy Spirit in and, remarkably, He filled the room with His unmistakable presence.  Different people experience the presence of God in their own ways. I experienced a vibration running through my body that became stronger and stronger the longer we prayed.  I could feel this new indwelling of the Holy Spirit inside of me.  It was amazing.  I felt absolutely alive.  But the really amazing part were the prayers.  He gave us knowledge of what everyone else on our team was doing (none were in that little house, some were miles away),  and He told us exactly how to pray for them.  One would start a prayer and He would give another of us the rest of it, so that as a team He gave us the whole picture to pray.  And we could see into our teammates’ hearts and know how they were feeling, or what they were struggling with.  We knew things about them that we had no way of knowing in the natural.  So we prayed both for what they were going through that day (such as the work they were doing, or the people they were building relationships with or ministering to), and for what they were going through in their personal life and walk with Christ.

More miracles to come.  Tell someone to tune in…

This entry was posted on Friday, January 23rd, 2009 at 6:45 am and is filed under Mexico 2006 Mission Trip. You can follow any responses to this entry through the RSS 2.0 feed. You can leave a response, or trackback from your own site.

One Response to An Unmistakable Presence: Mission Trip Excerpt